The association is currently taking part in a local Community Speedwatch Scheme which was initially set up by Cllr McEwan & our neighbours in Haughton/Springfield in 2019 and is in partnership with Durham Police. The Scheme which is educational rather than being about enforcement is being run by local volunteers who have had to undertake relevant training as well as Police Check’s in order to participate in this initiative. An accurate calibrated Speed detection device is set up by the group at a designated hotspot selected within the ward.

Information will be recorded by trained volunteers on any driver exceeding the speed limit by more than 10%. For example a driver recorded travelling at a speed of between 34-37mph in a 30 mph zone will receive a letter from Durham Police warning them of their speed. Anyone travelling between 37- 40 mph will not only be notified but will be issued with a fine. Cllr McEwan stated that “There's a mathematical formula around the committing of crime. It’s a function of crime getting detected, getting caught, reward and conviction. Any offender whether they are speeding or robbing a bank will carry out a sub-conscious cost-benefit analysis.”

Cllr Andy Keir will be taking the lead on this initiative in our ward of Whinfield, whilst Cllr McEwan continues co-ordinating the scheme in Haughton. Ideally the Speedwatch team will be running Speedwatches at least twice a week at various hot spots within the area so anyone who is able to spare some of their time and would like to volunteer or would like further information on the scheme can contact either the Secretary of the WRA or Cllr Andy Keir. 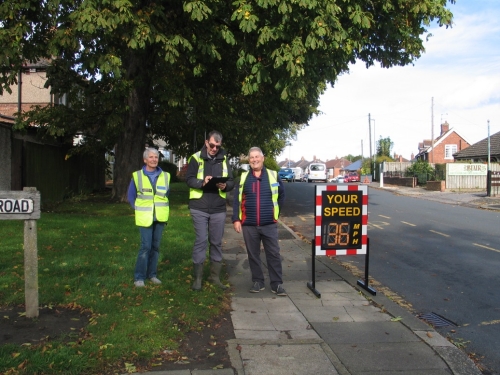